My Oven Makes Noise When Heating Up. Is Anything Wrong With It?

Does your oven sound weird when you are heating it up? Learn what the reasons can be and how to fix it! 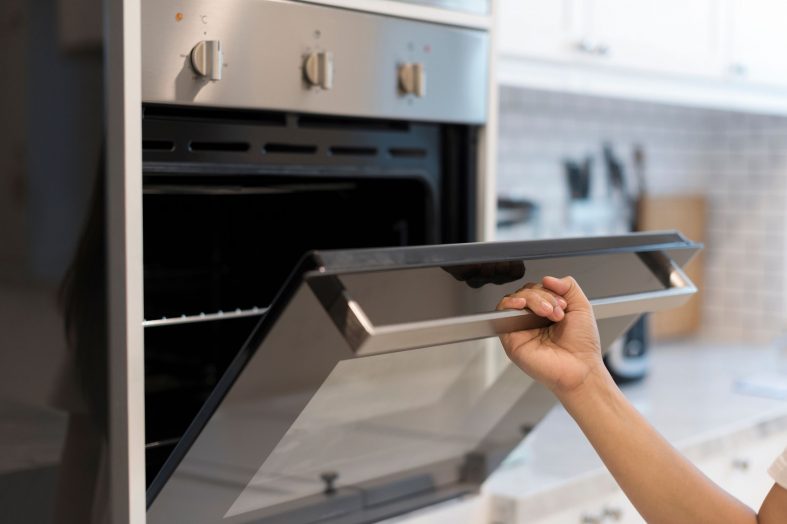 Let’s be honest: when you turn your oven on and it is starting to heat up making weird noises at the same time, that’s freaking scary! Meaning, you don’t know what makes those noises, and why would your appliance suddenly start sounding like this. Maybe it’s broken? Or something got stuck in the gas pipes? Or anything is wrong with the gas supply?

Too many questions answers to which is not something you would like to deal with!

However, weird sounds that your oven makes are not always about something bad. Of course, the reason might be some kind of breakage, or there might be problems with the gas flow, etc.

This is why today we decided to investigate what the reasons could be of your oven making noise when preheating.

We will overview the most common types of noises that users complain about, and we will try to find out what causes them, and how you can fix that.

My Oven Sounds Weird! Is It Time For Panic?!

No, it’s definitely not! You need to have your head clear and your mind calm to be able to fix the issue. Is your gas oven making noise while preheating? Then there can be several reasons why this is happening.

But not all of them mean that something is broken in the appliance. It may just be a loose body panel, for example!

So before you rush and call the gas maintenance service, we recommend you read on and figure out what noises your oven can produce that you consider weird, and what could be the reasons for them.

What If Your Gas Oven Makes Boom Noise?

If your oven sounds like it’s about to explode making the “boom” noises, it might be scary, we agree. It usually happens when your oven is preheating and you suddenly hear those small and rather quiet sounds.

Does it really mean that something bad is going to happen? No, it does not.

However, it doesn’t also mean that you can ignore those booms. This sound simply indicates that the gas inside of the oven has ignited.

However, instead of igniting right away as it should be, it filled the oven tub and the igniter eventually lit it.

Simply speaking, those booming noises indicate that your oven’s igniter is getting old and weak.

Yes, it is still letting the gas out, but the ignitor is not able to get hot enough and do it fast enough to make the gas ignite right away. In this case, it is strongly recommended to replace the igniter with the new one.

Vibration And Rattling Noises? Your Convection Fan Might Be Loose

This issue is a frequent point of concern for the owners of ovens that have a convection fan since only this type of ovens can have it. See, a convection fan is needed for sucking in hot air and recirculating it so that the heat is completely even all over the appliance.

However, since this process requires the use of a fan, its motions can loosen the bolt in the center of it. As a result, the increasingly rattling noises and vibration will be heard.

This issue can easily be troubleshooted if you turn the fan off and listen to your oven. Has it stopped making those strange noises? Then it was the fan that caused them. Luckily, you can easily fix the fan yourself.

Just reach it through the back of your oven and tighten the bolt in the center. However, if it keeps on getting loose, you should think of replacing it as soon as possible.

Check the Cooling Fan As Well

As the fan rotates, you may start hearing squeaking noises that appear at the end of your oven’s use. Usually, all you need to do to fix this problem is to add more lubrication to the spindle of the fan.

If your gas stove is making weird noises that sound like rattling, then it is highly possible that the cause is the body panel. If you have recently made any minor fixes or repairs on your oven and you opened up a panel on the appliance, you could just not close it up tightly enough.

This issue can be fixed easily. Just go and check how tightly your oven’s body panel is attached and how well it is secured.

If needed, close it up tighter. And even if the panel is fine, still better give it a check. See, over time, its screws may become loose and start rattling as well!

Another cause of rattling sounds that come from your oven is the door lock. You will hear its rattling especially clearly when turning on the self-clean.

If you have an old gas oven that makes noise when heating up, it might be the mechanical timer. Why only an old oven, you may wonder? Well, because the newer models usually don’t have one.

But if yours does have it, overtime, it may begin to make sounds that remind you of whirring because of the constant exposure to heat and fat.

Those noises will usually appear when the timer starts up and shuts off. Since the timer is a self-contained piece, it is very hard to clean out and fix, so the only way you can stop those noises is to replace it.

Is Your Oven Making Popping Noise? That Might Be Electrical Issues

Why does my gas oven make a popping sound? Well, this is the obvious and clear sign of some electrical issues, especially if it is accompanied by an unpleasant burning smell. Yep, that’s the sound that none of us wants to ever hear from our ovens!

Once you hear that popping and crackling, and you know for sure that it is not the food that is being cooked inside of the oven, you would want to turn the appliance off.

Why is that? Because this sound you hear and this smell you sense indicate that the part of the wiring or other electrical components in the oven are malfunctioning.

And if you can sense that burning smell, then these components have definitely started to scorch.

So as you can understand, this is obviously a huge fire hazard! So first of all, you want to turn the oven off (even if you are cooking something in it right now!). Then, disconnect the gas and electricity from it until you figure out what exactly happened.

With all this in mind, you will now be able to easily define whether the sounds that your oven makes are worth being worried about or not. And should there be any electrical issues with the appliance, don’t try to fix them yourself! Always call a professional.

What Noises Can Be Considered Normal For Your Oven?

Oven is a pretty quiet appliance, but if you listen to it really carefully, you will still hear some small noises. However, even though your oven can make noises that indicate that something is wrong with it, there are also sounds that are completely harmless.

So to be aware of what oven sounds do not tell of any danger, check out the list of noises that are pretty normal for any oven.

And of course, let’s not forget about the sounds that come from the items that are inside of the oven! For instance, sheet pans can sometimes make a loud pop if they heat up way too quickly. Also, it might just be oil popping.

What Tells You That Your Oven Is Faulty And Needs Repair

Weird noises or just any noises that come from your oven can not be considered as a clear proof of your appliance’s malfunctioning. If your oven does make noises, but it is still operating properly, it might not be a major source of concern for you.

However, there are certain obvious signs that often come along with weird noises and indicate that something is wrong with the oven.

So check out the list of such “red lights” to know for sure when you should think of calling a professional for repair.

Now let us explain each of these factors in detail. Let’s start with abnormally loud sounds your oven can make. See, if an oven is working properly, it will be making very quiet and slightly noticeable humming sounds that are absolutely normal.

However, if your appliance starts buzzing or ticking like a bomb, it is definitely time to call a repair technician!

In most cases, extremely loud noises that come from your oven are an indication of some parts of it getting loose, mostly the fan, the body panel, or the door.

Also, if you notice that the food you cook in your oven is always either undercooked or overcooked, the appliance might be faulty. For instance, the igniter might become blocked in a gas oven affecting how the food is cooked.

The temperature sensor can also be problematic, by the way! Anyway, no matter the cause, call a technician to fix it.

You should do the same if your oven is heated unevenly and makes weird noises in addition.

Usually, it is a sign of an electrical issue which might be a fire hazard, so don’t hesitate and call a technician.

Finally, if you have had your oven for years, and it suddenly starts making weird noises, don’t be surprised. It’s just old! A high quality oven usually lasts from ten to fifteen years if maintained properly. So if yours is older, think of buying a new one.

With these tips and recommendations we gave you today, you can now identify when your oven is sounding weird and must be checked by a technician, and when those are just harmless sounds that you can pay no attention to.

In any case, be careful with the oven sounding odd since it might be the signal of its malfunctioning!

⭐ Is it ok if a gas stove is making noise when off?

Yes. It can be the sound that comes from the inside panels cooling down.

There might be too much gas getting into the oven.

⭐ What is the average lifespan of a gas oven?

If it’s a high quality oven that’s properly maintained, it will work for 10-15 years.

Can You Microwave Glass Jars?

How to Reheat a Frozen Apple Pie

How to Reheat Cinnamon Rolls?

How to Reheat Chicken Parm?

What Time Is Brunch?
Don't have enough
time to read in a day?
Get the most rated articles on your email!