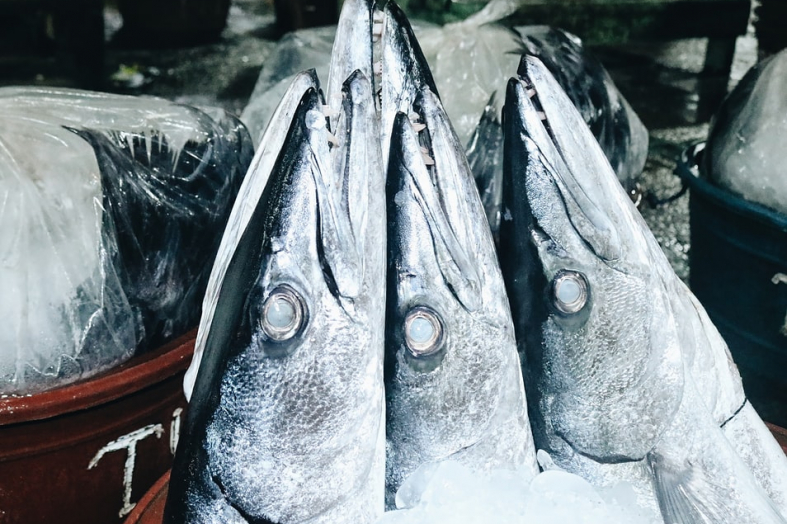 When we think about seafood, what does usually come to mind? Cod, salmon, shrimps…and other more or less common meaty foods from the ocean. But quite often, when we eat out, for instance, we may face the difficulty of deciding whether to order a certain dish or not just because we have no idea of its taste!

So, what does swordfish taste like? Swordfish has sweet-flavored gentle meat. Swordfish meat has very tender and moist meat with a sweet flavor. You can grill or broil it without any harm to its nutrients. Gentle swordfish subtle flavored meat is an excellent source of selenium and omega-3 nutrients.

So today we decided to enlighten you and tell you more about such sort of seafood as swordfish. Its texture, flavor, taste, and what to pair it with – you will learn all this below.

What Is This Creature?

Probably, everyone has seen the image of swordfish at least once in their life: an elegant fish with an elongated round body and that significant long, flat, and pointed sword-like snout that gave the creature its name.

This ocean dweller can be rather large reaching the length of a maximum four and a half meters with its weight sometimes getting to 650 kilos!

This massive fish can be found in most of the oceans including the Indian, Atlantic, and the Pacific.

Its meat is very nutritious and appears to be the perfect source of protein for people. Some even say that swordfish can be a proper substitution for a steak!

What About the Taste?

Those who have never tried this fish before often wonder what its taste is like. Unlike most kinds of fish, this one, when cooked, doesn’t have that specific fishy scent and savor. Instead, the meat of this fish has a mild and slightly sweet taste, and its pinkish flesh turns beige after cooked.

The one significant feature is that its meat remains moist even after cooking which makes it stand closer to the traditional meat steak in terms of texture.

What is also good to keep in mind is that swordfish is rather oily: its fillet has about 30% oil which is higher than the same part of the white fish, for instance.  So if you enjoy meaty seafood, swordfish is your choice, since it doesn’t fall apart as salmon does after being prepared.

But if you are more into the lighter versions, then it won’t probably satisfy your taste.

Swordfish has mild and sweet flavored meat. Swordfish has a rich meaty texture, and it is excellent for people who do not like fish because it has a meaty texture and does not have any fish smell. It goes great for grilling and for steaks.

Is It Good For Wellbeing?

People who take care of their wellbeing often wonder whether swordfish is good to eat regularly.

Well, according to the official data, fish has to be consumed at least twice a week, and swordfish can be a good option, too.

So yes, choose swordfish if you’re looking for seafood that will fit your dietary eating.

Swordfish steak has a gentle, sweet flavor and meaty texture. It is very moist meat without small fish bones. It is good for both grilling and frying because of its texture and unique flavor. The swordfish steak will be an excellent dish for every meal.

How to Eat It

The question seems weird, right? What can be so complicated about enjoying a piece of fish, you might ask?

Well, when it comes to swordfish, it will require certain skills to cook and serve it so that the meat will reveal its best taste.

The good thing about this seafood is that it tastes awesome on its own. Just coat it with some olive oil and sprinkle with salt and pepper – and your dinner is ready. But if you wish to add more taste, then consider using the following seasonings:

As for the side dish, swordfish steak will pair best with any grilled veggies, coleslaw, fresh salad, potatoes, or even pasta.

How to Prepare It

Since swordfish has a very dense texture, it can be easily grilled. Nevertheless, frying, broiling, or baking is also an option.

Very few preparations will be needed: just pat the steak with paper to remove the moisture, remove the skin, and marinate if you wish.

To fry it, toss the steak onto a hot oiled slightly pan for five minutes and turn it over to let the other side to fry for 2-3 minutes more. Remember that swordfish fillet has to be the same as a beefsteak – still pink in the middle!

Try other options like a seafood casserole or soup, a chowder, or the oven-baked fillet – swordfish will taste wonderful in any case!

This sort of seafood is rather versatile when it comes to preparing it. Grilling, broiling, baking, and frying – any method will reveal its taste and let you enjoy that dense meaty texture. But be careful! Overcooking is strictly forbidden since the meat will get too dry.

To make it taste even better, try to add something new to the existing recipes.

Swordfish, with its meaty texture, has the same texture as the shark has. But it has sweat-flavored moist meat without any fishy smell. It goes excellent while grilling or just in ordinary steaks. It is not so tough as tuna and has more moist meat.

How to Choose It Properly

Buying fresh food is a must if we want to both make a delicious meal and eat safely.

With the swordfish, pay attention to the following signs that will prove the steak is fresh:

Swordfish is known for its mild and somewhat sweet taste and dense oily flesh. It is perfect for both traditional cooking (e.g. frying or baking) and grilling and pairs well with various side dishes. Choose the steak carefully and enjoy this seafood to its full!

⭐ Is Swordfish safe to eat?

Yes, it is, if you buy a fresh fish that has been recently caught.

⭐ What is the most unhealthy fish to eat?

Among the most unhealthy sorts of fish, you can find bluefin tuna, Patagonian Toothfish, monkfish, grouper, farmed salmon, and some others.

⭐ How many times a week can you eat swordfish?

Twice a week is perfect to get all the necessary nutrients.

⭐ Do swordfish have worms?

Sea worms can be found in any fish; however, if you buy fish from the trustworthy sellers, the chance of finding a worm in it is extremely low.

This kind of seafood has a somewhat sweet and mild taste with very little of the traditional fishy savor.

Yes, this fish is rather expensive. The average price is about 30 dollars per 1 lb.

⭐ Why is swordfish high in mercury?

The older and bigger the fish is the more mercury it accumulates. Since swordfish is one of the biggest we consume, it contains a lot of this element.

⭐ Is Swordfish high in mercury?

Yes, this fish along with king mackerel, shark, and marlin contain a lot of mercury.

D’you Think You Store Meat Right? We Will Prove You’re Doing It Wrong!

Does Coffee Cause Acne?