All about how it tastes, how it smells, and how to make use of this root crop 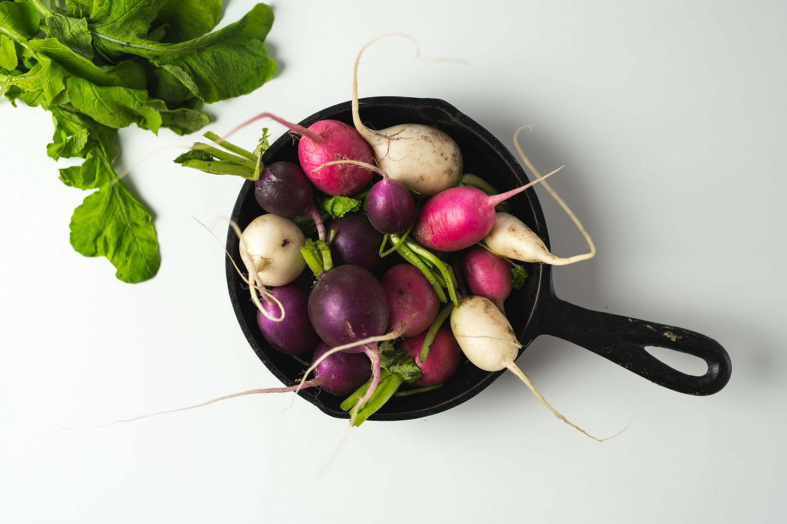 Turnip can hardly be called an exotic vegetable, but still, quite few of us can describe its taste clearly unless we make use of this root crop regularly in our kitchen. And since cooking implies being aware of the taste and scent of all the ingredients, people often wonder about the turnip taste.

So today we decided to help you to learn what turnips taste like and how to make use of this foodstuff to fully enjoy its flavor and nutritious value.

To say it simply so that everyone could understand, the taste of  turnip is somewhere in between the tastes of cabbage and radish. It is the same sweet with a bit peppery notes in it, and it has the very same crispy white insides.

However, we need to take into consideration that the sort of this root crop, as well as its age will influence the flavor and taste. This nuance often becomes crucial when it comes to choosing a veggie to cook it. So what could the distinctions be?

And even though we normally don’t use turnip for daily cooking needs, it is good to know what makes it different from the other most common root crops with a similar texture and taste profile, such as potatoes and rutabaga.

So whenever you decide to incorporate this root crop into your daily cooking routine, we would recommend paying attention to the age of the veggies you purchase. If you are going to cook something that requires delicate taste, a young turnip will definitely be a better choice!

Generally speaking, the taste of these two can’t be called absolutely similar.

When it comes to the turnip vs potato taste issue, the opinions split. Some people find the tastes of these two root crops pretty similar, but we would not be that sure. As you already know, turnip tastes like a mix of radish and cabbage. Potatoes, on the contrary, have a somewhat different taste profile that includes creamy notes with a subtle and mild sweetness.

Nevertheless, turnip is an ideal substitute for potatoes in terms of its texture, so if you don’t mind the taste much, consider using one instead of another to make the dishes more varied.

As we know from our friends from PreparedCooks.com – quite a few people know that the greens and leaves of turnip are also edible. We talked with our friends from . Nevertheless, it is true. And when it comes out, home chefs start wondering what the turnip greens taste is.

Such a curiosity is reasonable since we need to know what the taste of the final dish will be if we add something to it that is not a common ingredient (and let’s agree, we don’t make use of turnip leaves of greens that often!).

So, regarding the taste, turnip greens are pretty much the same as the root crop itself having very similar peppery notes which means you can incorporate them into any dish that implies the use of the veggie. Be ready though that turnip greens may have that significant tingle which will disappear pretty soon.

Its leaves, on the other hand, may have milder taste.

A Bit About the Turnip Smell

When it comes to figuring out turnip flavor profile, we usually expect this root crop to have pretty much the same aroma as its relatives (potatoes and rutabaga) have. And basically, it is the right assumption. However, turnip scent will also have those quite significant mustard-like notes that are common for cabbage and broccoli.

What we do have to be aware of is that overcooking this root crop is strongly not recommended: if we boil turnip for too long, we will get the same effect that takes place when we cook cabbage too much. The root crop will produce that peculiar strong sulfur smell that is not the best thing to sniff.

So what is this veggie in fact? It is often mistaken to rutabaga, and people often think turnip is a close relative to potatoes, but everything is not that simple.

This root crop is in fact closely related to radishes and mustards having quite similar taste and aroma. Turnip has the same white insides that are crispy and slightly sweet, with very mild peppery notes.

Besides, turnip greens that grow right from the above-ground part of the veggie are known for having almost the same flavor as mustard greens.

In terms of shape, this veggie is roughly globular, being around 5 to 20 cm in diameter with a long taproot that is usually cut off before the veg arrives to the stores for being sold.

How to Make Turnips Taste Good? Cooking Tips And Suggestions

Since turnips may have quite significant bitter notes and old veggies must always be consumed in a cooked form, being able to prepare this root crop becomes an essential skill. Fortunately, turnips are rather versatile stuff in terms of culinary, and besides, there are plenty  of recipes that ask for this veggie and offer delicious and nutritious meals.

The only thing we need to keep in mind is that for cooking turnips the root crops must always be peeled! Also, if you are going to use old veggies, consider adding salt, garlic, andbutter (or cream) to the dish. Those ingredients will decrease the bitterness and make the root crop taste milder and creamier.

Turnip is a very versatile veggie for cooking, it is simple to prepare and its low price makes this root crop a very affordable foodstuff. With the mild and slightly spicy taste, it can become a worthy part of your daily cooking making it more varied.

When mashed, turnips have slightly buttery and delicate taste with light sweetness.

If you mean the greens or leaves, those will have the same taste as the veggie itself, only sometimes with the stronger tingle and pepper-like notes.

They have a delicate sweet flavor that is similar to baby turnips.

When pickled, the root crop becomes tangy, salty, and crunchy.

15 Ways How To Tell If Canned Tuna Is Bad

Best Tea for a Cold
Don't have enough
time to read in a day?
Get the most rated articles on your email!