Can You Freeze Ham? Main Rules

Is it acceptable to freeze ham at all? 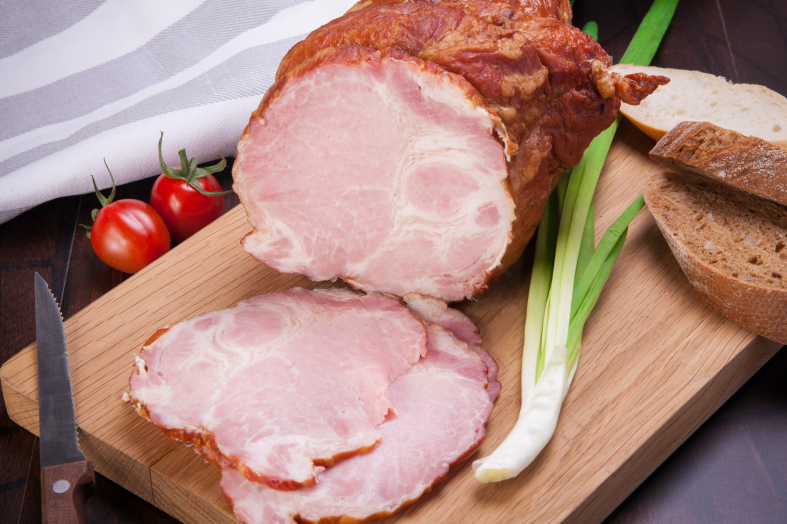 Freezing food is probably the optimal way to save it and preserve it for further use. However, not all the products can be easily exposed to the effect of frost! For some of them, such a method of storage can even be a cause of spoilage.

Ham, as one of the most popular products in the world, interests consumers a lot regarding this point.

Can ham be frozen?

In the article below we will take a closer look at all the nuances of this question and see whether it is acceptable to freeze ham at all.

Stay with us and let’s go!

Ham is used and consumed in almost any family. We add it to the sandwiches and salads, put it on top of the pizza and find many other tasty ways of eating it. Naturally, sooner or later a question occurs whether ham can be kept edible longer and,  respectively, frozen.

Whether you have too much ham left after the party or holidays or your friends or relatives have brought you too much of it, sooner or later you will face the issue of whether ham can be frozen.

In addition, different questions will begin to appear, for example, whether any kind of ham is safe to freeze or not or whether it is fine to freeze it more than one time.

If you have never had to deal with this issue before, it will be useful for you to learn several handy tips on how to freeze ham to keep it tasty and edible so that next time you will know for sure what and how to do.

Is there a best way to freeze ham, you may wonder? Well, in fact, the way ham is frozen depends on what kind of ham it is so actually there won’t be such a thing as the best way ever to freeze any ham.

And now, let’s see what nuances we need to take into account before we proceed to freeze this delicious food.

Many of you, guys, probably ask themselves whether freezing ham on the bone is possible. Fortunately, the answer is yes. Such kind of ham can be easily frozen.

All that you need to do is to put the ham into a freezer-friendly package, preferably with the zip lock, and toss to the freezer. Now your ham can safely stay there for up to half a year!

If it so happened that you have too much of ham left or even a whole untouched piece, feel free to freeze them. For freezing leftover ham, slice it or cut it up, put into the airtight package that is freezer-friendly and freeze. Like this, the ham will last for about a month.

Smoked ham can be exposed to the influence of frost just like any other kind of ham. After it has been frozen, such ham will remain edible for a maximum of two months.

In general, any kind of ham freezes well no matter whether it is a sliced, cooked, smoked ham or ham on the bone.

The only difference will be about the duration of its storage period and some nuances regarding unfreezing.

Related: How Long Does Cooked Sausage Last In The Fridge?

Can you freeze sliced ham?

Ham in slices can be easily frozen to extend its shelf life. For freezing sliced ham at home, place the slices into the freezer-friendly airtight package and put everything to the freezer.

How long can you freeze ham?

The duration of the frozen ham storage period depends on what kind of ham was exposed to the influence of frost.

Sliced ham and leftover ham lasts the shortest, something about a month whereas ham on the bone, when being frozen, will remain edible for six months at most. Smoked ham will be staying consumable for two months.

Can you freeze baked ham?

Baked ham is OK to be frozen if you need to extend its durability. When being correctly sealed and stored, it will last for about a month.

Knowing these specifics will allow you to preserve ham better and ensure that it will keep its qualities longer and remains safe to consume.

How to Freeze Cooked Ham. Useful Detail to Keep In Mind

Since cooked ham is one of the most popular and widely used kinds of this food, there are many questions being asked regarding freezing cooked ham.

How long can you freeze cooked ham, for example?

If you need to keep the ham for more than four days which it can easily spend refrigerated, you’d better freeze it.

Any freezing-friendly package or tank will be OK for this purpose. Just place the ham inside, seal tightly and toss it into the freezer.

Like that, the ham will shift its expiry date for three to four months.

Can you freeze cooked ham twice?

Everything depends on how you unfrosted it. If it was done in the fridge, then ham is absolutely safe to freeze repeatedly. In fact, any other defrosting methods like microwave-defrosting are strictly not recommended as they cause too aggressive exposure of heat to the ham which can lead to the growth of harmful bacteria with further spoilage of the product.

Related: How Long Does Roasted Pullet Last In the Fridge?

How to Tell If Ham Is Bad

Frozen ham will hardly get spoiled, however, it’s always better to stay alert and check it before consuming.

So how do you define that the ham started rotting already?

After unfreezing it, examine the surface first. If you spot any dark spots or you see that the ham has become somewhat slimy to the touch, it means that it has gone bad.

Whenever you notice any of these attributes, discard the ham instantly without hesitation.

Well, now you are a real ham pro! Remember to use all of these tips in your kitchen and you will never have to worry about the spoiled food anymore!

Can You Freeze Cooked Ham?

Do you belong to those who prefer buying a fresh cut of ham and cook it yourself at home instead of purchasing a pre-cooked foodstuff? Then you probably often faced the common problem: after you got that piece of pork’s leg, finally decided how exactly it will be prepared, and actually cooked it, you either tend to have a pile of leftovers of a piece of untouched product that must be handled somehow.

Sound familiar? Well, you are not alone! Quite many people have the same trouble when cooking ham at home, especially if it is done for a special occasion like a Birthday or any other party. You buy a large piece of ham planning to finish it all and everything ends up in extra pieces left that you suspect nobody will be able to finish in time before it spoils.

Somebody might say that it happens because ham is sold in bulk cut portions and it is pretty hard to define how much exactly you will need. But no matter what the reason is, everyone is concerned about the solution.

Fortunately, ham is the kind of foodstuff that can be preserved relatively successfully.

The very basic requirement is that the foodstuff must be sealed properly to prevent freezer burn or oxidation which may lead to further spoilage. To achieve that, correct and thorough wrapping is a must.

Usually, it is recommended to double-wrap the cooked ham in butcher’s paper to create an extra protective layer. Also, extended freezing is not the best option even though this product is rather long-lasting and not that demanding unlike other kinds of foods.

So if your goal is to have a delicious and well-flavored bulk, we would recommend you keep that ham in the frosting camera for no more than half a year. Of course, cases are known when it was stocked way longer, up to a year, but when doing so you put it under a huge risk or taste and savor degradation.

So how do we stock cooked ham long-term?

This foodstuff remains eatable really well, that is true, but it doesn’t mean that we can treat it carelessly when preserving.

And in case you are absolutely sure that ham must be exposed to frost, it would be useful to keep in mind several essential tips.

Surprisingly many consumers ask the same question when it comes to freezing cooked ham. That question is: “Is it possible to preserve sliced cooked ham this way?”. To a certain point, we can understand those worries: sliced or cut foods tend to spoil and degrade their quality way faster and nobody would like to toss such a delicious foodstuff into the trash bin!

Luckily, even sliced cooked ham can be successfully preserved.

However, the procedure will take you a bit more time compared to frosting a whole bulk.

To preserve it in the frosting camera, each slice will have to be individually wrapped in frost-resistant plastic cover and placed in a packet designed for freezer-stocking.

As for the duration of storage, the term will be the same as for the uncut foodstuff and consist of six months.

What to Do With It After Freezing?

Once the first and the most difficult stage is complete and ham is preserved successfully, the second point of concern comes.

How to defrost it correctly?

The worries are not that pointless here since improper unfreezing can lead to the foodstuff being too dry. So if we don’t want out precious meal to turn into a shoe sole,  we will have to make use of some tricks to keep it juicy.

By the way, using such a method will make the product way easier to work with no matter how you are planning to prepare it later

As for the way of consumption, everything hangs upon everyone’s personal taste and preferences. Some people like eating unfrosted ham cold, others prefer baking it or heating up and adding to various dishes – the variety of options is almost unlimited.

We hope you will adhere to these simple hints and preserving cooked ham will never become an issue for you!

Can You Freeze Coleslaw Salad?
Don't have enough
time to read in a day?
Get the most rated articles on your email!