Why Do Nuns Cover Their Heads?

Ever wondered what nuns wear their veils for? Today we will solve this mystery for you! 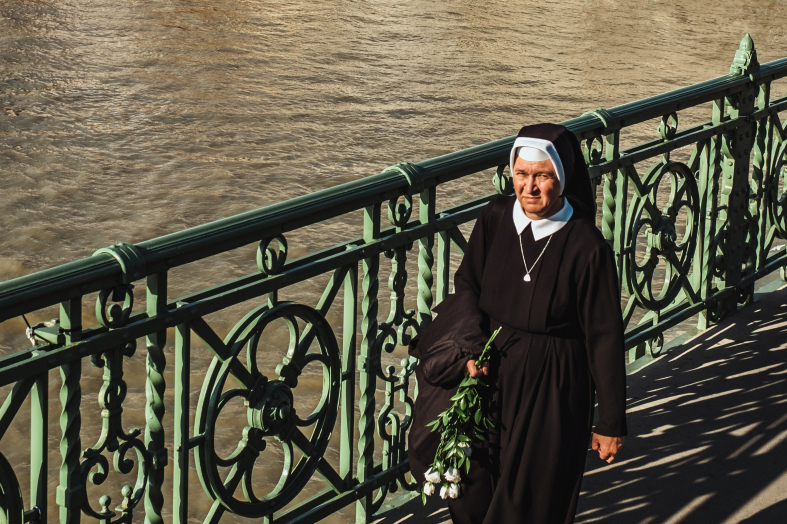 In many religions, women are supposed to cover their heads with scarves or veils. It is a rule not only for the commoners, but especially for the nuns! But why do they have to do that? Is it mandatory for a nun to wear her headdress? What’s wrong with a nun’s hair that she is supposed to hide it under the cover for the rest of her life?
These and other questions will be explained and answered today!

Why Do Nuns Wear Veils?

Why do catholic nuns cover their hair? This is perhaps one of the most frequent inquiries people ask when seeing these women dressed all in black robes with their heads being covered all the time.

And the answer is pretty simple. To find it out, we need to go back to the times when the very first orders of nuns were found. In those days, women were totally prohibited from walking outside of their houses with their hair loose and uncovered! Of course, if that referred to commoners, the brides of Christ were especially obliged to follow this rule strictly. So the first reason why nuns hide their hair under the cover was this.

However, there was (and there still is) one more reason why a nun head covering is still being in wide use in all the religious orders. See, when a woman decides to become a nun, she must give certain vows, such as a vow of poverty or a vow of modesty, or others.

And to be able to show that she gave those vows, a nun wears her headdress as a symbol of purity, modesty, and, to a certain point, her separation from the rest of society.

So basically, a veil is a symbol of a nun’s status and, at the same time, the sign of her affiliation to church (or the order she is in) and her submission to God.

But if we take a look at the earlier times, we will see that veils and various hair covers were in wide use. Women of a noble class used to also wear head veils in order to show their status! Like that, they could separate themselves from the women of a lowly class. So wearing a head veil was and still is an identification sign.

What Does the Bible Say About Head Covering?

If we dig deeper into the Bible texts, we will see that female characters all wear various head coverings there. Those could be veils, scarves, and other types of clothes that women put over their locks to hide them from the strangers’
eyes. According to the holy texts, when a woman wears a veil, she shows her dignity, modesty, and humility.

According to the Bible, a woman that does not cover her hair when praying or prophesying disgraces herself. Also, in the Bible we can find words about a woman’s long hair being her glory whilst for a man, having long hair is dishonorable.

What Do Nuns Wear On Their Head?

The answer may seem obvious since, as we all know, nuns wear veils. However, things are not that simple with their headdress!

Wearing chapel veils is indeed a part of the Christian tradition that comes from early Christianity. All nuns must wear them even today both at church and outside of it. Also, in the Roman Catholic church, veils are part of the nun’s habit.

Later, this tradition was passed onto the Catholic church, too. Nowadays, even some Catholic women that are not nuns continue wearing veils.

Normally, head veils come in different shapes and sizes hanging upon the specific religious order. In addition, not all of them are worn the same way: some veils cover the entire head whilst others must be attached to the hair with the pins.

However, it is not only a veil that nuns wear! Some of you might have noticed that nuns can also wear some sort of hats. Those hats are called kamilavkas. They have cylindrical shape and a veil is supposed to be attached to them. Kamilavkas are common in Eastern Orthodoxy where both nuns and monks can wear them.

What Types Of Religious Headdress Exist

For those who are not well aware of various types of headdresses and covers used in different confessions, realizing that not all the monks and nuns wear veils might be a surprise! In addition, people from different denominations also tend to wear different head covers.

However, it is true that different religions have distinct headdress types for their ministers of the church. To not get lost among them all, check out the most common ones.

Do Nuns Shave Their Heads?

Since nuns always have to wear either veils or both a special hat and a veil, many people wonder how they can stand thet, and whether nuns must also shave their hair.

Well, to be honest, not all nuns must shave their hair off! In most of the orders, it is not a mandatory demand at all. However, years ago at the beginning of Christianity, when a woman decided to devote herself to God and become a bride of Christ, she would have to shave her hair indeed. It was a sign of her devotion to church and faith, and besides, by shaving her locks, a woman was able to indicate that from now on, she gives all herself to serving God. It could also be considered as an act of renouncement of vanity.

As for today, most Catholic nuns and sisters usually simply cut their strands to symbolize their religious transformation. But we do suspect there is one more (completely practical) purpose of doing that. It is way easier to wear a veil all the time when you have short hair!

Do Nuns Have to Cut Their Hair?

Shortly speaking, yes, cutting hair off is still an existing tradition in religious institutions, such as nunneries. The explanation is simple: when a woman decides to become a nun, she refuses all the pleasures and temptations of the “outside world”. Also, when becoming a nun, a woman gives her femininity and sexuality to God as a gift.

To symbolize that, she gives vows and cuts her hair off. Also, depending on the order she is in, and the type of nun she is, a bride of Crist may either cut her hair really short or even shave it off completely! Yes, this is still a common practice in some nunneries!

Why Do Nuns Wear Black?

As you might already notice, nuns have not that much choice when it comes to the color of their robes. Black is the only color they are allowed to wear, and naturally, a question appears why it is so.

The answer can be found in the symbolic meaning of the nun’s habit worn in monasteries. Black has always been considered as a color that represents simplicity, dignity, and repentance. For a woman who promised herself to God, this is the perfect symbol of her choice.

However, some nuns still can wear white! Even though not for a long time. For instance, the novice nuns of the Cistercian order are allowed to wear white robes and headcovers during the second year of their nunnery.

So, as you can see, the choice of color was never random for the nun’s headcovers and robes. As everything about the church and religion, the color of nuns’ habits is also deeply symbolic. The same as the tradition of cutting hair when converting into the nunnery.

⭐What is a nun's headpiece called?

It’s called a veil. A hat is called kamilavka.

⭐Do nuns cut their hair?

Yes, they do it when converting to nunnery.

⭐Do all nuns have to shave their heads?

⭐Are nuns allowed to get married?

No, they are not. Nuns give a vow of chastity which means they must have no romantic or sexual relationships, as well as they can’t get married.

Battle of the Sexes: 19 Amazing Differences Between Men and Women
Don't have enough
time to read in a day?
Get the most rated articles on your email!