What it is, where it comes from, and how to eat it 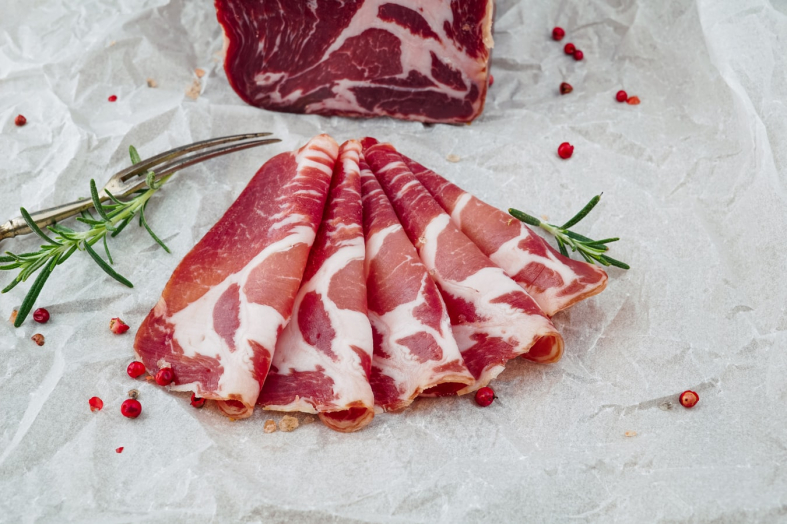 When one hears the word “guanciale” for the first time, it may seem completely unclear. Some may say it is the name of a sauce, others would suggest it is some exotic dish. In fact, both would be wrong since guanciale is the name for the pig’s cheeks prepared according to the specific recipe.

And today we will tell you what exactly it is, how it is made, and how we can use this unusual yet delicious foodstuff in cooking. Let’s go!

What Is Guanciale? Italian Foodstuff to Know Closer

Shortly speaking, guanciale is a meaty product that originates from sunny Italy. To be precise, it is made of pig’s cheeks or jowls (in Italian, “guancia” means “cheek”, and the traditional guanciale pronunciation is [ɡwanˈtʃaːle] ).

Later the pieces of meat are processed and seasoned before they end up on the shelves of stores. This foodstuff is sometimes referred to as Italian bacon, but in fact, this is not the correct definition for it.

See, during the process of preparation, the pork cheeks are rubbed with salt and spices that usually include ground black or hot red pepper, thyme, fennel, and sometimes garlic. Afterward, they are being cured for three weeks or simply until the meaty bulks lose approximately thirty percent of their initial weight.

As a result, such a pork cheek has a delicate texture and quite a strong aroma unlike other foodstuffs made of pork. Italians love cooking with guanciale because during the heating its fat melt away giving the dish or a sauce that incredible flavor and taste.

However, this typical Italian product can be consumed not only when being cooked! Guanciale tastes perfectly well when eaten as it is sliced in thin pieces and being placed over the fresh bread with some butter or greens.

Another area of use for these pork cheeks is pasta. In Italy, most of the pasta dishes contain guanciale. Besides, it also complements various sauces ideally.

Quite a multipurpose thing, don’t you think?

Can It Be Made At Home?

Most home chefs and smoking enthusiasts will definitely ask that question, and yes, in fact, pork cheeks can be made at home. However, one must keep in mind that such a procedure not only takes much time but it is also very responsible and must be taken according to all the food safety standards since you’re working with meat.

But if you’re an experienced meat smoker, then go for it, experiment with salting and curing methods, but remember: making guanciale is not that simple!

How to Store Guanciale After You Buy It

Since we are not Italians, buying proper pigs’ cheek may become quite a challenge. And for succeeding in this task, we would recommend sticking to markets and Italian stores where it is possible to buy true guanciale.

However, buying it is just the beginning. The major question is how to keep it. Most of us would probably assume that shoving a meaty piece into the fridge is enough, but is it so?

In fact, it is! The optimal way of storing this foodstuff is to refrigerate it. Simply wrap it with the butcher’s paper, and place to chill. Once you are in need of this meaty yummy, take it out, cut as much as you need, and return the rest back to where it belongs.

If we think of any possible meals that can include guanciale, roman pasta will be the number one suggestion for sure. And indeed, in Italy, pork cheeks are widely used for cooking all possible sorts of guanciale pasta. This meaty product has even found its place in the traditional recipe for carbonara!

So if you are looking for culinary ideas that can successfully include guanciale, we would recommend trying out one of these dishes (be prepared, there is gonna be too much pasta!):

But if it seems too heavy for you, just enjoy this delicious foodstuff being thinly sliced and placed over a slice of fresh crispy bread with some greens, cream cheese, or whatever you like it with! Believe us, guanciale will even complement a simple omelet!

Italian cuisine is delicious and so many of us truly enjoy it, but have you ever had that feeling when you come to an Italian restaurant, open the menu, and…well, you realize you can’t understand a word?

Yep, we mean those typically Italian names of products that often confuse us even in a supermarket when we are breaking our brains trying to figure out the difference between pancetta and, for instance, prosciutto.

If this sounds familiar to you, then it would be handy to learn what exactly those things are.

The most correct pancetta definition would be that it is a pork belly. For this reason, the word “pancetta” is often used as an Italian bacon name, though bacon does not necessarily come from the very same area.

Besides, both pancetta and bacon are cured and cut in completely different ways which make them distinctive from each other.

The major pancetta meat characteristics are:

If you wonder what pancetta goes along with best of all, there can’t be one precise answer. It is delicious when being eaten as antipasti itself or on top of a sandwich. However, its taste is revealed to the full when we add pancetta to various cooked dishes.

As for pancetta substitute, you want to go for some bacon, salt pork, prosciutto, or even smoked ham or sausage.

If we compare pork belly vs bacon, it may seem that they are the same, but in fact, pancetta and bacon have certain distinctions.

The major one is that bacon doesn’t always come from the same area as pancetta which is made of a pork belly only. Bacon, however, can be made from the pork back (the lean cuts) or from its side or belly (those will be meatier pieces).

This is also why we often have bacon with those white fatty stripes: it simply means it was taken from the pig’s belly. And yep, this is the one that gets heavenly delicious and crispy when fried!

Another distinction is that bacon is often not only cured but also smoked. Usually, cold smoking is used which means the meaty stuff is still raw after it’s done.

One can easily tell the difference since smoked bacon has a golden rind whereas unsmoked one has it white.

There is instant pancetta vs prosciutto fight in Italy since it’s impossible to decide which one is tastier, and we can understand them!

The main difference between pancetta and prosciutto is that prosciutto is a dry-cured ham that is served uncooked and sliced in paper-thin pieces. It is made of a pig’s or a wild boar’s hind leg or thigh, however, sometimes the legs of other animals are used.

It is eaten as it is or along with grissini, figs, and even…melons! In Europe and the USA, prosciutto can be added to pizza as a topping. However, it doesn’t mean we can’t use it with pasta, sauces, and other hot savory dishes like cooked veggies or meats.

And if you already feel a bit lost among all these distinctions, we prepared a handy chart for you to always keep by hand just in case.

So these were the basic distinctions between the most common meaty foods we eat daily, and now you know what that guanciale is, and what to do with it to enjoy its taste to the full.

⭐ How to make guanciale?

Pork cheeks are made by trimming the fresh meat with the skin on, then salted for several days. Afterward, the salt is removed and spices are applied, and then the meat is being aged 60-70 days.

⭐ Where to buy guanciale?

If not in Italy where it can be purchased directly from the producers, it’s better to buy it in the markets or in the stores that sell such foods.

⭐ What is Amatriciana and guanciale?

⭐ How to make rendered guanciale?

You can just put it being cut into a pan with some olive oil in, and render it over low heat turning guanciale now and then until the fat has dissolved almost completely. The meat must be slightly crispy.

Can You Freeze Chicken Livers?

Beans, Their Types, And Health Usefulness
Don't have enough
time to read in a day?
Get the most rated articles on your email!