What Is Hydrogen Peroxide: All the Stats, Facts, and Data You'll Ever Need to Know 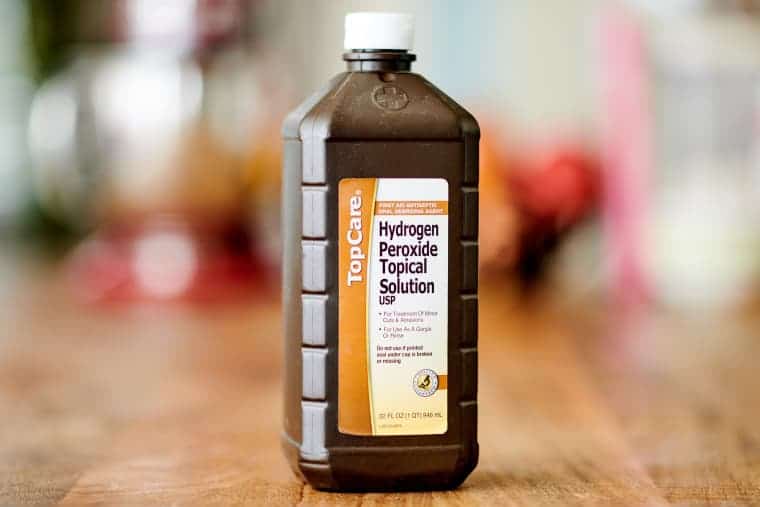 Hydrogen peroxide is used for various household purposes, for instance, deleting the spots from furniture and for bleaching clothes.

Since it is a chemical compound, using an expired one might be dangerous.

That is why we advise you to read this article carefully.

How many of us have a bottle of hydrogen peroxide at home somewhere on a shelf? Probably, quite many, right? This chemical is an irreplaceable helper for any housewife but do we know how long it can be stored safely?

Let’s see when it’s time to say goodbye to it.

What Is Hydrogen Peroxide?

To begin with, let’s clarify what this peroxide is.

Hydrogen peroxide is a chemical compound, its formula is H2O2. Pure peroxide is a clear and very light-blue liquid with a texture slightly more thick compared to water.

However, today it is widely used for commercial purposes and manufacturers add different components like stabilizers to give the compound certain characteristics. Of course, such inclusions may somewhat change the basic traits of the compound.

Hydrogen peroxide belongs to acids even though it is one of the weakest ones.

It is successfully used for:

Nevertheless, one must be very careful when working with H2O2 since, when it contains certain additional components, its acidic powers may become stronger and, respectively, more destructive to people.

When working with hydrogen peroxide, always protect yourself from this compound by wearing gloves and a protective mask. Since it is an acid, it has a destructive effect on our skin, eyes, and insides (lungs, throat, etc.).

For the same reason, always keep the hydrogen peroxide container away from children and pets.

H2O2 tends to explode when mixed with vinegar or bleach so never combine these liquids together!

Not so long ago, hydrogen peroxide was widely applied as an antiseptic but today it was proved to be more dangerous than useful for our skin so don’t use it for treating cuts and wounds.

Since we use this chemical at home often enough, we must be aware of the basic storage requirements and be knowledgeable about the proper storage conditions of the compound. Otherwise, there is a high risk of it turning bad.

These requirements work for both pure hydrogen peroxide and the compounds that contain it. No matter how concentrated the compound is, it must be stored strictly as it is advised.

When being kept properly, hydrogen peroxide expiration date can arrive after quite a long period of time!

Does hydrogen peroxide expire and how long do it last?

When unopened and stored according to the prescribed requirements, the compound will easily remain usable for three years.

However, after the bottle or the tank was opened, use the liquid within six months. If it’s kept longer, it will lose its qualities and will have to be discarded. Since hydrogen peroxide reacts to air, once opened, it will start breaking down to the water slowly.

The shelf life of peroxide strongly depends on following the rules of storage so make sure that the chemical is safely and properly placed.

How to Tell If Peroxide Is Still Good

Of course, knowing how to tell if hydrogen peroxide is still good can help a lot when one needs to find out whether it is safe and possible to keep on using a solution or not.

To check whether you have old hydrogen peroxide use a simple and absolutely safe trick that won’t take much time.

Just take some H2O2 and pour it into the sink. If the solution starts bubbling and fizzing, then it’s fine and can be used. If no visible effects appear, then the chemical is most likely bad.

When hydrogen peroxide compounds expire, they slowly turn into water, that’s why there will be no bubbling effect when exposing them to air.

What Makes Hydrogen Peroxide Expire If Does At All?

Well, to be precise, this compound can’t literally expire meaning that it will not turn bad or something.

There are no obvious signs of spoilage that can be noticed like the bad smell of any changes in color or texture. You won’t also find any sediment or other visual proofs of the chemical getting bad.

An unopened bottle of hydrogen will remain usable for three years easily, of course, if stored according to the rules.

However, this liquid is best to use ASAP once the bottle is opened since the product may indeed lose its qualities after six months of storage unscrewed!

Since the chemical contains extra oxygen, it is very unstable and water starts dissociating right after it’s produced.

No matter how well we keep it, it will one day become H2O instead of H2O2 and there’s nothing we can do about it.

So yes, hydrogen peroxide will become less effective anyway. That is why it’s advised to replace it in time, otherwise, there’s gonna be no use of it anymore.

What Products Does Hydrogen Peroxide React With?

Hydrogen peroxide is a truly irreplaceable thing in any household! This chemical compound is a multifunctional thing being able to find its use in the food-producing and textile industry, in chemistry, and even in our homes!

Of course, those who use it for household purposes must be aware that H2O2 is not always safe to mix with certain other products since it may cause an active reaction.

To be sure that you are not going to blend it with something that will lead to an explosion, check out what chemical products can’t be safely added to H2O2.

If we blend these two together, we will get a reaction that creates peracetic acid. It is a strongly corrosive form of acid that can badly harm the skin, eyes, nose, and throat along with the lungs if we breathe in its vapors.

Nevertheless, it is allowed to use these two products separately one after another.

Even though you might want to enhance the peroxide cleaning qualities by adding some ammonia, we would not recommend you doing so. If combined together in the same tank, especially in the closed one, these two products form dangerous gases that can badly harm your health if being breathed in.

Hydrogen peroxide is often used for laundering as it whitens and brightens our garments. However, it would be a bad idea to mix it together with bleach or any other chlorine-containing cleaning agent. Such a compound will release harmful gases that are bad for our throat and lungs and can cause much trouble.

Since today we are using quite many chemical products in our households, it is essential to learn which of them can be united and which are safer to use separately since certain combinations can be rather harmful!

Be careful and take care!

To make you even more knowledgeable about H2O2 specifics, we’ve prepared several tricky questions that people often ask about this chemical. Hope they’ll be useful!

Expired peroxide is useless, that’s true, but it is absolutely harmless since when bad, it turns to water. However, it doesn’t mean it is drinkable!

How long does hydrogen peroxide last until it turns in the water?

The unopened bottle will keep the liquid’s qualities for three years if stored properly. After breaking the seal, it must be used within six months at most.

Can you use expired hydrogen peroxide?

Expired peroxide is useless since it turns into water.

What happens when hydrogen peroxide expire?

After the complete expiration, hydrogen peroxide turns to water.

How to test hydrogen peroxide?

To ensure that the solution is still good, give hydrogen peroxide a test. Pour it into the sink and see whether it bubbles. If it does, then the chemical is fine.

The compound will sooner become water than evaporates enough to turn into a more concentrated solution. However, if it explodes, its fumes can be dangerous.

No, hydrogen peroxide does not freeze it is impossible since H2O2 won’t harden even at -52 C.

As you can see, hydrogen peroxide is quite safe to use at home, nevertheless, certain precautionary measures must be taken to prevent any sudden accidents.

Always keep it properly stored and hidden from kids and pets.

Protect your skin and eyes when dealing with the chemical since it is acid even though it’s weak.

Never try to taste expired peroxide and don’t let the children do so!

And of course, be careful and never mix it with vinegar or bleach to avoid an explosion.

Can You Bleach Polyester? 6 Unusual Tips
Don't have enough
time to read in a day?
Get the most rated articles on your email!