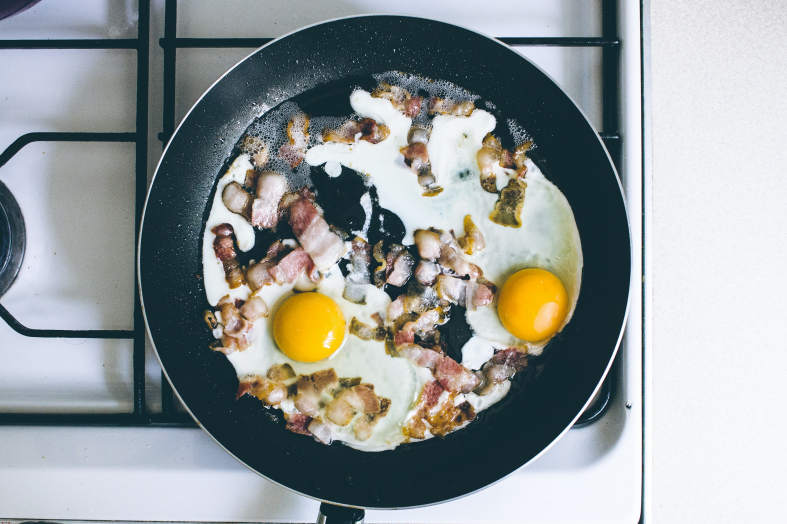 Bacon fat is the best way to add more richness and aroma to the cooking compared to vegetable oil, for example.

It also takes pretty much effort to extract grease out of fresh bacon as you need to be careful and not to burn it. So no wonder that, after spending so much time, effort, and patience on collecting some grease, people may wonder: how long can you keep gammon fat?

Well, below we will tell you all the useful information we know about the bacon grease shelf life.

Join us and enjoy it!

Related: How Long Does Roasted Pullet Last In the Fridge?

Ways to Use Bacon Grease

First of all, let us figure out how we can use this precious bacon fat except for cooking. Of course, grease-roasted veggies or bacon fat-fried burgers or meatballs are delicious but there are plenty more methods to apply this product in the kitchen.

Any suggestions? Yes, you are right if you say something like “adding it to the sandwiches”, this is quite a popular option, especially in England.

How about making popcorn using bacon fat instead of ordinary oil? As a bonus, you will get a wonderful bacon aroma!

Bacon fat is also good for frying grilled sandwiches with cheese and even for replacing butter partly in the biscuit recipe.

When making pizza at home, try to brush it with some bacon fat before you start topping it. Like that, it will give the pizza dough a bacony flavor and crispness.

For those who don’t know, bacon grease can serve great as a base for almost any gravy, in addition, when added to mayonnaise instead of oil, bacon fat gives it an awesome taste and flavor.

Actually, you can find many more options for using it from adding to the mashed potatoes instead of butter to frying rice or eggs on it.

What really bothers people about all this is the only one question: how long is bacon fat good for? Because everyone wants to preserve it to its longest to enjoy this wonderful product to the full.

And of course, being aware of several bacon grease storage hints is also a must for any housewife or simply bacon-lover.

So let’s proceed to the most important part!

How to Store Bacon Grease

Storing bacon grease is not as hard thing to do as it might have seemed to you at first.

If you belong to those who prefer rendering bacon fat with your own hands in the kitchen, learning several easy storage hints will allow you to keep this product crisp and consumable for as long as possible.

To begin with, cool the bacon grease down right in the pan. Like that, you will prevent it from getting burned and, respectively, becoming impossible to use later.

As you probably know, there may be tiny bits of bacon left in the grease. If you want them to remain as they are, simply let the grease cool down with these particles in it and wait until it becomes solid.

But in the situation when you want to have pure bacon fat, pour it into a tank through the cheesecloth.

An important thing to keep in mind is that the best container for storing bacon grease is a glass or earthenware tank because plastic will simply get burned if you pour some hot grease in it. And also, glass and ceramic prevent the external odors from getting inside, too.

Everything depends on what you want to get in the end. You need to know that, when being kept at room temperature, bacon fat stays good much less time than when being refrigerated. However, none of these storage methods will affect its taste, flavor or other qualities.

When being refrigerated, bacon grease will remain consumable for several months if you follow all the requirements and rules and store it correctly.

Related: How Long Is Cooked Salmon Good For? Stocking Suggestions

Can you freeze bacon grease?

Bacon grease can be easily frozen. In this case, the product will remain usable for nine months but you need to take into account that the grease will become even more solid than when being refrigerated so it may take some effort to scoop it out of the jar.

How long can you keep bacon grease at room temperature?

When being kept like this, bacon grease lasts less than when being exposed to the impact of frost or cold. Anyway, you can safely keep it for half a year for sure. Only ensure that you keep it in a dark-colored, opaque, tightly closed tank.

Can you reuse bacon grease?

Not a good idea, to be honest. Once you used some grease for cooking, it can’t be used for the second time because of the microbes that will make the fat get rancid.

Nevertheless, even when following all of these requirements and advice, bacon grease can turn bad. Why is it so? Let’s find it out!

Even despite the fact that bacon grease is quite a long-lasting product, it will get spoiled sooner or later, especially if being stored improperly.

How long can you save bacon grease? It depends on how you are storing it. If it is staying at room temperature, then you can be sure that the fat will stay edible for six months. If the grease is being stored under the impact of frost or cold, its expiry date will shift to several months.

How to spot the signs of spoilage in this case?

Smell it, this is the best way. If you sense the rancid odor, then everything you can do is to discard the grease.

Another but still very unlikely sign is mold which can appear on the very old and improperly stored fat.

Following these easy rules and requirements will let you both keep the bacon grease crisp longer and protect yourself from any unpleasant results of accidentally consuming spoiled products.

Yes, we are used that bacon fat is the sort of food that fits only for frying. But did you know that if we put it to the foods we cook, their taste and aroma will intake more meat smoky notes?

So instead of throwing these precious leftover fats, go for one of the recipes below to give your food a new dimension.

1. Baked potatoes. It’s a new look to the old recipe

Sounds simple but if we rub the bacon fats onto the russet potatoes, then place them to the oven, and finally, when the dish is ready, we will stuff potatoes with red onions fried with bacon fat, it’s going to be a brand new look of the well-known food.

Put ¼ cup bacon fat into the pot and place it to the stove. When it’s melted, add several popcorn kernels and after they start popping, add ¼ cup more. Cook stirring until the kernels begin to pop, then cook more and stop when they popping slows down.

Put the content to the bowl and sprinkle with shredded cheese. Done! The tasty snack is ready to serve!

Take a skillet and put it on the stove. Melt bacon fat so that it covers the bottom of the skillet. Take flour tortillas, sprinkle with paprika, and cook until it becomes crisp and golden. This light food will work perfectly as a fas snack.

It is a fine food to cook for any meal. And if we add some bacon grease to the skillet, the loaf will have that incredible meat flavor and crispy crust.

Try to make waffles, pancakes, or toasts using bacon fat and wonder why you never thought of doing that before! Such common meals will get such a new savor!

Why Keeping Bacon Grease Can Be Handy. Unexpected Use Of Bacon Fat

We tend to make use of bacon grease in the kitchen for cooking mostly, but this foodstuff has several areas of use that can appear to be quite new! This is why we shall keep a jar of this foodstuff in the fridge.

Yep, the bacon fat will work well when mixed into your pet’s meal! And if your dog used to refuse the food, from now on the plate will be empty.

Tins, baking bowls, and pans – bacon fat will be fine for everything, both sweet and savory dishes.

If you have a jar of fat in the fridge, make use of it for enriching your cocktail or liquor. They say the taste is great!

And of course, feel free to preserve some of it in the frosting camera for future use.

1. How can I collect bacon fat to keep it?

The best way to do that is to strain it right from the pan where it was cooked. Take a glass jar since it is better for hot liquids, and carefully strain the grease ensuring no food particles get inside, too. Using a strainer can help to avoid contact with the remnants.

2. Is it ok to keep bacon fat in the fridge?

Well, this product is much better to be kept frozen in fact since the fridge won’t provide it with proper conditions. Besides, frozen fat will last longer, not for years of course, but it will surely stay good for a month or so.

3. How to discard bacon fat correctly?

Remember that draining hot fat down the pipes is prohibited if you want your pipes to serve you for years. Liquid fat will solidify and block the pipes causing damage. Instead, wait until it is solid, scoop it with a spatula, and toss.

Watch Next
What to Do With Leftover Bacon Grease
xIPaIgK3XHI
Does Polyester Stretch?

How Long Do Hot Dogs Last?

How Long Does Cooked Sausage Last In The Fridge?

How Long Does Roasted Pullet Last In the Fridge?
Don't have enough
time to read in a day?
Get the most rated articles on your email!