Tick Nest and What do Tick Eggs Look Like? 🐜 Beezzly

How Long Do Oranges Last?

5 Life Hacks How to Wash Underwear?

Interesting Tick Facts You Should Know

Ticks are mistakenly considered to be insects, but actually, they refer to arachnids. The study of ticks is related to such a section of zoology as acarology. According to scientists, there are over 54,000 species of these tiny arachnids in the world.

But every year, the number of species is increasing, thanks to new discoveries and research. Ticks cause great harm to humans and animals. Ticks are often the carriers of infectious diseases dangerous for humans, domestic, and wild animals.

The bite of a tick can cause serious consequences. The fact is that ticks are often the carriers of infections that can lead to death. These are Lyme disease, West Nile fever, tularemia. The most detrimental thing that can occur after the bite is tick-borne encephalitis, an acute viral disease that affects the central nervous system.

Not all ticks carry Lyme disease.  The typical carrier of borreliosis is the so-called deer tick (Ixodes scapularis). To know what they look like, find pictures of baby ticks on the Internet.

The tick is small. Adult insects are up to 3 cm in size, but most species are 1.5 cm or smaller. All ticks are parasitic. Their color and body shape may change after blood supply. Blood makes ticks increase in size. Blood goes directly into their intestine during suction. As a result, the weight of the tick increases several times.

The gut is made up of many chambers and therefore is able to stretch so that a replete tick can weigh up to 200 times more than a hungry one. Ticks usually have 4 pairs of legs, and eyes may be present or absent. Some ticks are round, others are flat.

Where Does a Tick Live?

Ticks live in ordinary parks, forests, and in the green areas near lakes. Most people mistakenly think that ticks can be met only in dense forests with shrubs. But, according to statistics, most of the post-bite hits are recorded among the urban residents who return from the local parks after the daily walks through the streets of trees.

You can also find a tick near a country house. Most victims do not feel when they are being bitten as the tick releases anesthetic fluid. The tick can crawl on the human body even in the apartment as you can bring it with a bouquet of flowers or it was on the wool of a pet that came from the walk. It can attack you in transport if the tick was on the clothes of other people returning from the forest.

Like all arachnids, ticks have a clear division into females and males. The most interesting life cycle is monitored in bloodsucking species. The following stages of tick development are distinguished:

You may come across some contradicting information on the Internet. Tick eggs can be found, but it is extremely difficult because of their size. Scientists are warning you will not notice tick eggs in grass.

You are more likely to find eggs of slugs, snails, spiders, insects, but these are not tick nests (although they are close relatives of spiders). Do not destroy the eggs of insects, as they may belong to an important species for the ecosystem of this region. There are plenty of tick nest images on the web, here you can check some of them.

A wood tick is a blood-sucking parasite of a small size, up to 4 mm in length (see photo), which, after getting on an animal or human skin, finds a suitable area and digs into it.

Females usualy stays on the humans body at least for six days, and males 3-4 days. During this period, due to blood saturation, the body of the parasite can increase in size by 120 times. At the same time, the victim will not feel the bite of the wood tick directly, and all thanks to the parsites saliva, which negates the sensitivity of pain receptors. 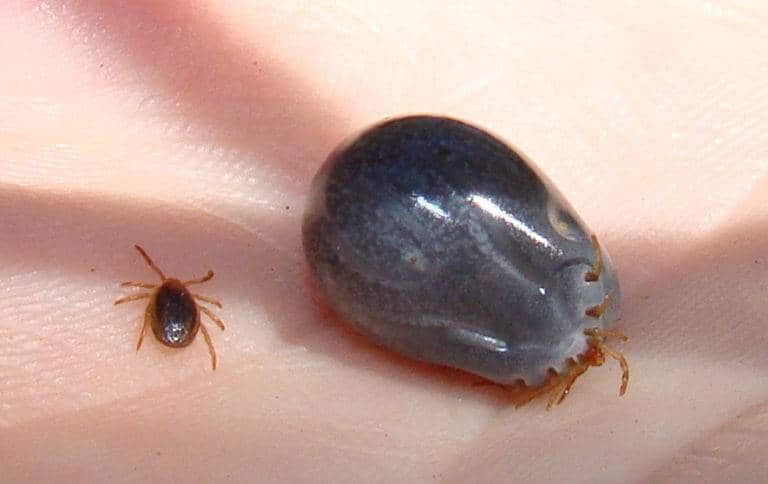 Because of this that it is not possible to detect a tick on your body immediately.

Wooden Ticks live, contrary to popular belief, not in trees, but in grass. They are usually located at a height of up to one meter. Ticks like to hide on the back of the leaf. They conduct wait-and-see tactics: as soon as the opportunity arises, they will immediately move to clothes and, rising up, will try to find a bare skin area.

In the spring or late summer, saturated with the blood, the fertile female tick lays eggs, and their amount may reach 2.5-3 thousand. What do tick eggs look like? They are a large enough cell, consisting of a nucleus and cytoplasm, and also covered with a two-layer shell of different colors. Tick eggs come in many shapes, from oval to square, flattened and elongated.

Ticks lay eggs in places with vegetation. They may choose cracks formed in the ground, especially if they are near the animal’s resting place. As soon as the eggs hatch, the house and animals may be affected by the invasion. The tick can lay 3000-7000 eggs, which is a rather disturbing figure. 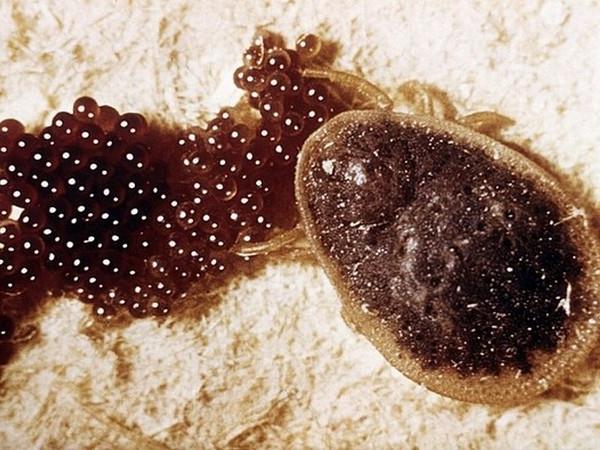 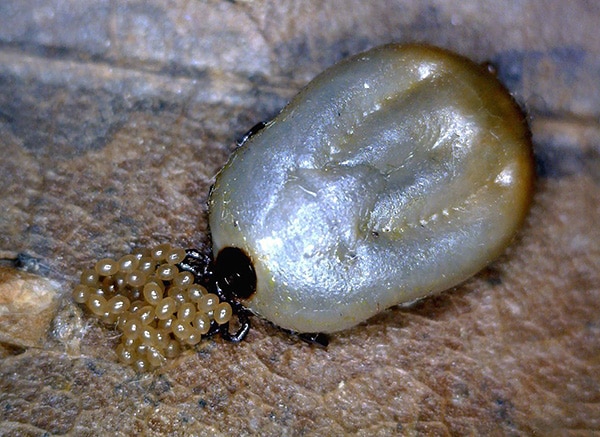 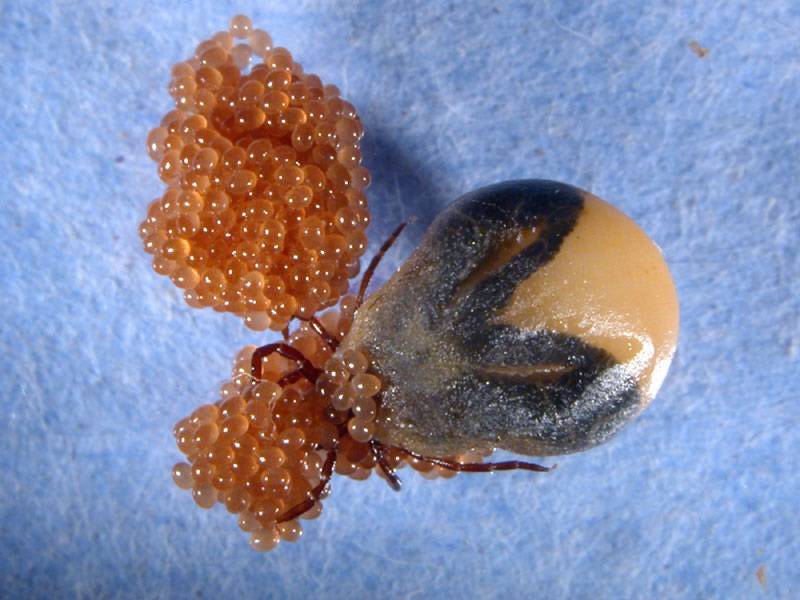 How many babies do ticks have?

The eggs with baby ticks are laid in the ground. The larvae that emerged from the egg eat just once, usually on small mammals (rodents, insects). Then it falls to the ground, sheds, and enters the next stage (nymph). After feeding and molting, it turns into an adult. A few thousand baby ticks are born from one tick nest.

How to Protect Against Ticks?

The most effective remedies are repellents. These are special sprays for children and adults, which are applied to outerwear and deter ticks.

You can also try folk remedies to keep ticks away:

When to see a doctor after a tick bite?

If you are bitten by a tick, it is advisable to see a doctor as soon as possible! He knows better how to remove it! Be sure to consult your doctor immediately if you have one of these symptoms after a tick bite: 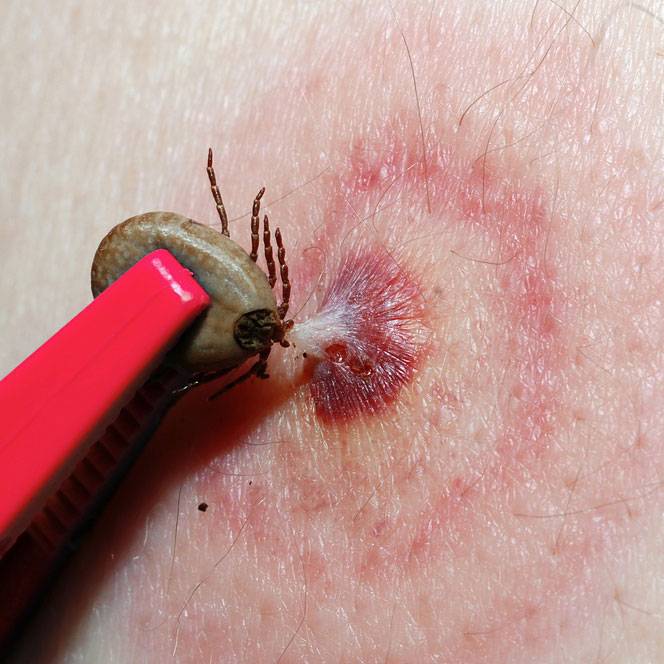 Symptoms can develop even after 1.5 months!

At first ticks are small, but when it gets some blood, it increases several times. Look at this tick on the hand. 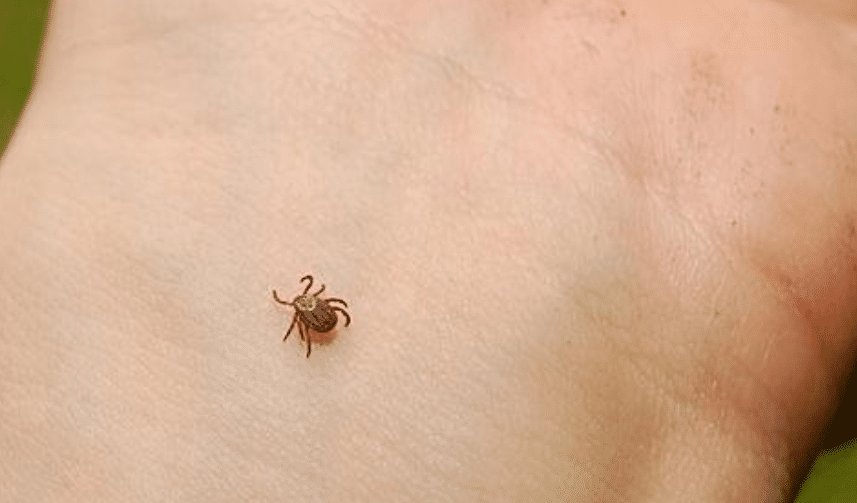 Ticks don’t fly and don’t jump, they wait for their victims on grass and branches of bushes. Not only people can be bitten by ticks, but also domestic animals, which, become bitten quite often, and can be carriers of tick-borne infections.

How many legs do ticks have?

The tick has 8 legs

How big are ticks?

Do ticks have wings?

Ordinary ticks does not have them. But some insects like a deer tick or moose botfly. Quite vile and tenacious, very similar to a tick (a tick, however, is not an insect), and have wings.

Interesting Tick Facts You Should Know

Sunstroke: How to Protect Your Hair From Sun Damage

Why You are Always Hungry? Stress and Other Reasons

How To Benefit From a Combination of Sleep and Sports: 4 Lifehacks

Don't have enough
time to read in a day?

Get the most rated articles on your email!