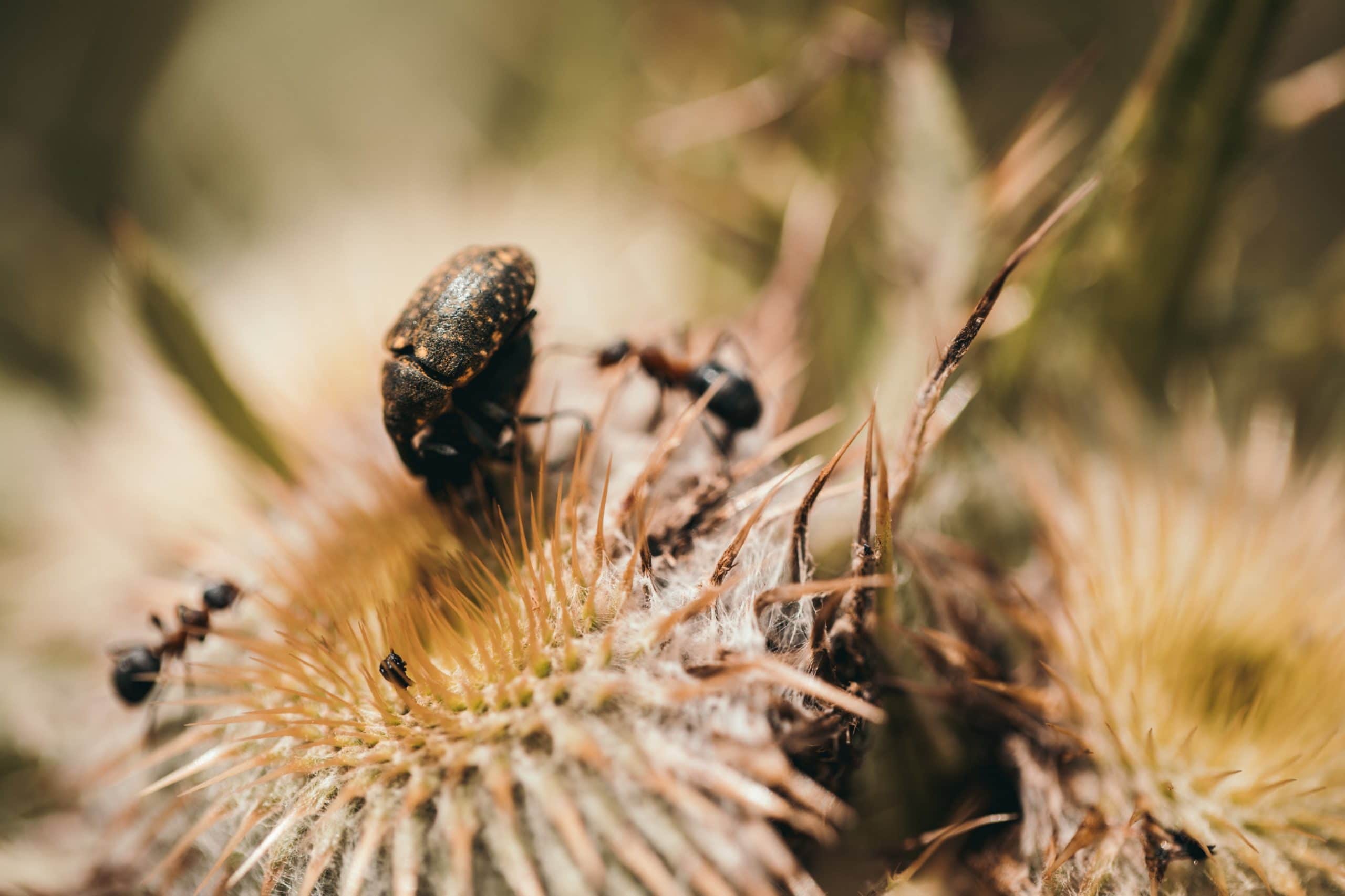 Insects that remind ticks bring a lot of harm to people. True tick is a carrier of dangerous diseases.

After the bite, it is advisable to go through a medical examination. Besides, the insect itself is to be submitted to the laboratory for analysis.

Insects that resemble ticks can be absolutely harmless, so it’s better to know who you have to deal with.

If you want to learn how to identify bugs that look like ticks but aren’t, keep reading this article.

Related: How to Define The Wood Tick Nest? Are They Dangerous?

Bugs That Look Like Ticks. Remember Them To Never Mistake!

Ticks can be a true seasonal disaster with their greed for fresh blood! However, people often tend to mistaken these parasites to several other bugs that are far less harmful but they remind ticks by their appearance.

To avoid unnecessary panic, we advise you to look through the following guide that describes the most frequently mistaken insects who are not ticks.

This insect is indeed pretty similar to ticks.

What makes them different is the number of legs (bed bugs have six whereas adult ticks have eight). In addition, bed bugs dwell indoor mostly unlike the bloodsuckers who prefer shady and grassy outdoor hideouts.

Some say that bed bug reminds cockroach being oval whereas tick has more round shape.

Besides, ticks resemble spiders greatly since they belong to the same arachnids family.

This creature is also an insect which means it has six legs and long antennae in addition that are hard to miss. Ticks, on the contrary, lack both these signs.

But the most obvious difference is that the cabbage bug has a distinctive color, bright orange/yellow with black ornament. Besides, it is larger than the tick.

Again, the major difference is the number of legs. If you notice this insect, count its legs. Are there six of them? Great! Then it’s not a tick!

Besides, these insects are larger being 1.7 cm long, and nearly the same wide. In addition, they have a well-recognizable shield-like shape that is hard to mistaken to anything else.

One more distinction is their elongated snout that has long antennae.

Some people take this insect for a tick but they are too different.

Head louse is much longer whereas ticks are closer to the round shape.

Besides, these insects also have six legs, and their body color is very light, from creamy-yellow to very light brown and it is almost transparent.

Ticks, on the contrary, look like nearly round brown spider-like pests.

This one is indeed hard to mistaken to the tick! The common weevil has a much more elongated shape, with the long snout that has two antennae on its end. Six legs show that it is an insect, besides, certain species have wings and can fly which ticks can’t do.

Weevil can be of different colors, from dusty grey to brown but it looks like a bug.

These insects are ⅜ inch long, pale yellow, or varying from brown to black. The most significant feature is the yellow-green triangular on their back right between the wings (yes, by the way, they can fly!).

All these traits make these bugs stand out when compared to ticks.

Booklice are sometimes mistaken for young ticks but both have quite significant distinctions.

Booklice have six legs, most of them are winged with the wings often spotted with dark dots. Their size vary from 0.6 to 7 mm.

The most distinctive trait is that they have very light color, almost white, unlike brown to black ticks.

This one probably looks like tick the most. Swallow bugs are brown, almost round-shaped, small (nearly like adult ticks), and they are very flat.

How to define them from ticks and don’t freak out? Swallow bugs have much shorter legs and there are only six of them whereas ticks are very long-legged compared to their tiny size.

And of course, the major distinction is that none of those tick-reminding insects feed on humans’ blood.

A Short Description of the Tick

When viewed through a magnifying glass, the tick externally resembles a crustacean. After carefully examining the limbs, you can see the resemblance to the spider. Experts say this creature belongs to a subclass of arthropods, a class of arachnids.

Tick’s body length is from 0.2 mm to 5 mm The trunk is divided into two parts and has a convex shape. Adult insects have 4 pairs of paws you can easily identify the tick nest. They can be gray, brown, brown, red. But there are many insects and beetles that look like ticks.

This bug looks like tick, flea, fly. It has a relatively powerful body, firm legs with claws. A distinctive feature is the presence of transparent wings and three pairs of limbs. The insect prefers sunny terrain with deciduous trees, shrubs, tall grass.

They attack wild animals, deer, elk, and cattle. They feed on blood and carry dangerous diseases like fever and Lyme disease.

A bloodsucker attacks a person if it is unable to find the animal for a long time. It does not live on the body, but for some time it absorbs into the skin and sucks the blood. This lifestyle often confuses people with the tick.

It is not easy to detect this insect as it leads a hidden lifestyle. The parasite is active mainly at night. It feeds exclusively on human blood. The bed bugs build nests in a room where a person sleeps. Their favorite places are under the mattress, carpets, sofas, interior items, books, furniture joints.

You can distinguish bed bugs from ticks by appearance.

A well-fed bedbug is a vulnerable creature that dies at the slightest pressure on the body and you also can kill it and prevent its appearance with special treatment for example bleach.

Ticks have a lot in common with spiders because they belong to the same class. However, it is very easy to distinguish tick vs spider.

The spiders have a convex body shape, four pairs of limbs, a solid eco-skeleton that is practically unstretched.

They eat insects, small animals. They do not like sunlight.

The person is not interesting for them, they may appear on the body by mistake.

It is possible to distinguish a tick from a spider by a characteristic web.

Arthropods form their networks for the victim. The web can easily trap butterflies, flies, larvae, mosquitoes, other small insects.

Tick identification is possible if you know the external characteristics, features of its activity, food.

The parasite is active in the warm season, lives in the wild, forest, city park, in the yard on the green vegetation. You will hardly spot a tick on the body immediately.

The main symptoms of a bite are itching, swelling, redness.

In most cases, beetles that look like ticks are not dangerous.

Related: What Does A Tick Look Like! Be Prepared

How to Determine What Bit You

It is difficult to avoid insect bites. In summer, this problem is especially relevant.

Sometimes it’s hard to determine what bit you. The wound can hurt, itch, swell. But do not panic.

And you may not recognize black bugs that look like ticks.

You should know some characteristic features of different bites.

To avoid unpleasant bites, take simple preventive measures. Going outdoors, pick up the appropriate clothing and shoes. The body should be securely hidden under a cloth and treated with protective compounds. Do not sleep in the thick grass. Periodically examine yourself, your loved ones and animals in order to detect a tick in time. After returning from a trip to nature, also conduct an inspection, including all things.

Bed bugs look a lot like ticks. The bite of the bed bug differs from the bite of the tick. Bedbug bites come in traces and they did not left a bug body in the bite.

It can be a deer bloodsucker. It looks like tick in some way but it can fly.

Bug that looks like a tick but has pinchers

Pseudoscorpions look alike but have pincers. They are rarely seen and aren’t dangerous for human.

Read next : Tick Nest and What do Tick Eggs Look Like?

How to Define The Wood Tick Nest? Are They Dangerous?
Don't have enough
time to read in a day?
Get the most rated articles on your email!