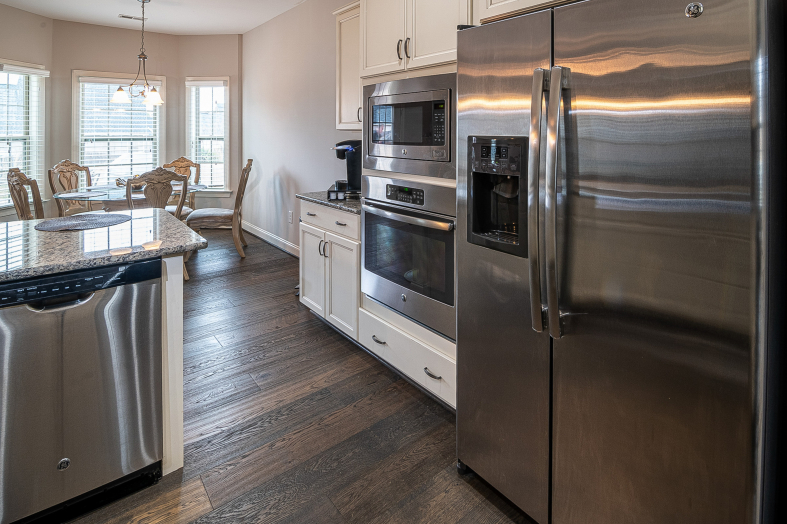 When choosing what kind of freezer to buy, it is important to consider how intensively you are planning to use it. Respectively, such nuance as whether it will be self-defrosting or manually defrosting matters greatly.

Which one is the best to use and why?

Let’s compare both models and figure it out!

What Is Self-Defrosting Freezer? Specifics Of The Device

To begin with, first, we need to clarify and define what kind of freezer is called self-defrosting and what the difference is between this model and the ordinary manually-defrosted one.

Well, the auto-defrost freezer, as it comes from its name, is defined by its ability to defrost itself without human interference.

Usually, it works in cycles shifting the on and off stages. First, it is functioning as the usual freezer and then it turns off itself after the preset period of time to let all the ice that has gathered by that time melt.

During the day, such a self-defrost freezer turns on and off several times which may cause certain problems in a way as it produces quite a lot of noise. The reason is simple and obvious: the engine is constantly in gear for shifting the freezing and unfreezing cycles all the time.

For those who can not stand any noise, the continuous humming and whirring may be rather irritating

Is there a difference between frost-free and auto defrost freezers, people often ask? No, no distinctions exist between these two devices since both these terms mean the same. The scheme of work for both devices is also identical.

Another point of concern that bothers people is what happens to the ice after it is melted in the frost-free freezing machine. Here everything is simple. After each defrosting stage, the water that the defrosted ice turns into is drained through the hosepipe to the special container that is located at the base of the machine, often from its backside.

We agree that such a construction may not seem quite convenient but, on the other hand, there is no need to take away that water yourself manually. It will evaporate by itself without your participation.

Usually, self-defrosting upright freezers are more expensive than their manual counterparts which, to tell the truth, is obvious.

Above, we were talking about the ordinary self-defrosting freezers that have an upright construction and look like the ordinary freezing camera in the fridge only being separated.

However, those who normally have quite a lot of stuff to freeze and don’t feel like wasting time on the unfreezing fuss, often ask whether self-defrosting chest freezer can be available on the market.

Even though most of the chest freezers are the manually-defrosted models, there are several ones that have an automatic defrosting system being built in.

Of course, if you decide to purchase the one like this, take into account at once that such a device will cost significantly more than the manual versions.

On the other hand, automatically-defrosted items will allow you to avoid wasting time on the unfreezing process regularly.

Now that we have found out what the frost-free freezers are, why not to proceed to the ordinary manual models to take a closer look at them?

Unlike the automatic unfreezing system, the manual defrost requires, as you could already understand, the direct interference of the owner of the machine.

It will be the owner who will be obliged to clean off the ice from the chamber each time the freezing machine is in need of it.

Of course, taking care of this kind of machine will require your time more often compared to the automatic version, on the other hand, these models are much cheaper and affordable.

How do you usually unfreeze the manual defrost upright freezer?

Well, the process is time and effort-consuming!

And only after the freezer and the shelves are absolutely dry, you can plug the advice in again setting its thermostat to zero. Finally, now it is safe to put all the foodstuff back inside.

Consider that you will have to go through this procedure regularly whenever the ice layer will reach the quarter-inch thickness.

Just like with the frost-free models, you can buy a manual defrost chest freezer.

The general scheme of functioning will be identical to one of the ordinary manual freezing machine. The only distinction is that the chest model will most likely lack shelves and will be somewhat more complicated to unfreeze.

One more inconvenience that the owners of the chest freezing machines with the manual defrost option have to stand is that this kind of freezer takes more space wherever you install it.

Well, since we have already found out what the basic distinctions and nuances are regarding the functioning process of the manual and frost-free freezing machine, let’s take a closer look at these two models and compare their major pros and cons, and see whether they really differ so much as they say about it.

Using this information, it will also be easier for you to make the right choice if one day you decide to buy a new device.

This comparative chart shows you the frost-free vs manual defrost pros and cons. Generally speaking, the main conclusions are the following:

And also, one more thing for you to consider. The chest versions of both the models are more spacious than the upright ones even though they are less convenient regarding the storage (no shelves, remember?).

Now you know what the main distinctions between the manual and frost-free freezing machines are and, hopefully, it will allow you to make a choice easier when the time comes to buy a new freezer for your home.

Choose reasonably and thoroughly compare and ponder, and be sure that both your household and the wallet will benefit.

How Long Can Food Last In The Freezer Without Power?

How to Freeze Celery and Keep It Fresh and Tasty
Don't have enough
time to read in a day?
Get the most rated articles on your email!