At What Temperature Does Gasoline Freeze?

What is too cold for gasoline in a jerrican? We know the answer and many more interesting things to tell you! 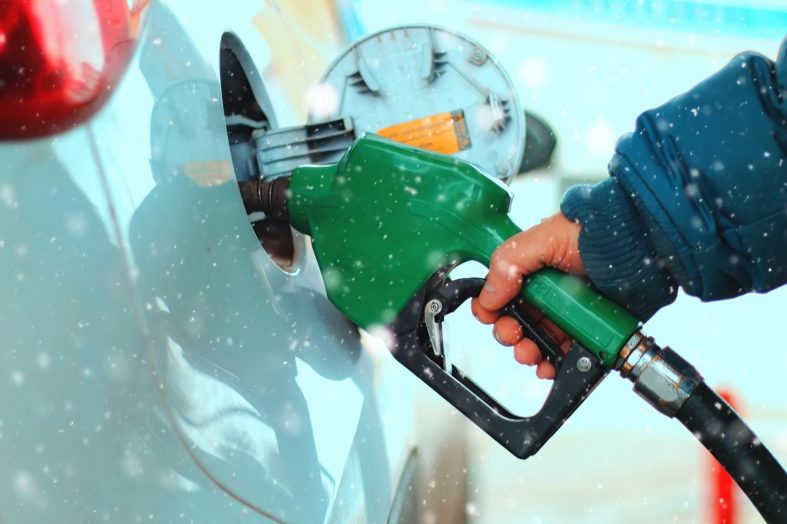 Winter is the season when drivers start constantly worrying about tons of different things from changing tires and proper gasoline storage to roads and radiators freezing. And when polar vortexes cause days of an extreme chill, there is one question that definitely appears in every car owner’s head: can gasoline freeze? And if it can, how cold must it be outside for it to start solidifying?

And it does not matter whether you live in a place with severe and harsh winters constantly, or you are just visiting. Being aware of such nuances as gasoline freezing temperatures is always a useful thing to know.

So today we will tell you about this, as well as about a few more handy things regarding gasoline and winter. After reading this article, no frost will hardly ever cause you or your gas tank any problems!

What Temperature Does Gasoline Freeze At?

Well, before we give you an answer, we find it necessary to remind you of what happens to gas when it is cold outside at all. See, unlike water, for example, gas does not freeze completely.

In order to go from the liquid state to its solid form, this substance needs the right type of molecules to arrange themselves in a new, orderly shape.

This way, the hydrocarbons in your gasoline will eventually slow down and thus harden sooner or later. However, they still don’t form a new state of matter.

As for the exact temperature the fuel will completely harden, there is no single answer here. See, this depends on the type of gasoline first of all, as well as on its components.

Different elements of the fuel are created from the unique molecules, and it will become more solid at different times. But if you need at least the approximate range, think of a range from minus forty to minus two hundred degrees Fahrenheit (-40 to -200 F) with the majority of it freezing at -100 degrees.

As you can see, it must be really very cold in order to make gasoline turn into its solid form! So unless you live somewhere in Antarctica or you plan to visit that area for quite a long time, this should not be an issue for you at all.

At What Temperature Does Gasoline & Diesel Freeze?

As for the diesel fuel, it will start clouding and slowly thicken, when the thermometer shows 32 degrees Fahrenheit already. That’s because the paraffin in this substance begins to stiffen slowly under the impact of the low temperature.

As for the gasoline, its freezing point is far away from diesel! Gasoline fuel will freeze at -100 degrees Fahrenheit, and even then the substance will not become totally solid all the way through. So the freezing will only be partial.

At What Temperature Does Gasoline Freeze In a Car Tank?

You might be wondering how cold it should be outside to make gas in your car’s tank freeze. Well, in fact, it does not matter where gasoline is located, inside of your car or in a canister in your garage or in a shed, it will anyway partially freeze when it is minus one hundred degrees Fahrenheit.

At What Temperature Will Gasoline Freeze In a Canister?

Regarding the gasoline that is already in a car tank, some drivers often believe that fuel will not freeze or will freeze less when being inside of the vehicle. However, we have to disappoint you!

For gasoline, it does not matter where it is, in a car’s tank or in a canister on the floor of your garage. In any case, the fuel will partially freeze at -100 degrees Fahrenheit.

This way, you know how cold it must be outdoors to make your gasoline freeze. And also, you are now aware of the fact that this type of fuel does not actually freeze meaning that gas will not turn totally solid even after reaching its freezing point.

With all that in mind, you will be able to figure out how warm it should be in your garage or a shed (or wherever you store your fuel) to make gas remain in a proper state ready for being used.

What Problems Can Cold Weather Cause For Gas?

When colds arrive, our cars are always under threat in this or that way. In terms of fuel, low temperatures may not be that beneficial for certain types of it. Have you ever noticed that in winter, cold pancake syrup flows more slowly in comparison to the hot syrup? That’s because in a cold environment, cold liquids tend to become way more viscous.

This is why it is a bigger issue with oil than gas, for example. And this is also the reason why cold weather oils are being sold. However, even gas, when being in a thicker state, will make your fuel pump work harder, making its lifespan shorter.

As for diesel, it freezes at a much higher temperature. This is why more anti-freezing products are available for diesel fuel, and this is also the reason why truck drivers often leave their cars’ engines idling on frigid days.

When it is really cold outside, gas can even separate and turn into a gel just like diesel! And the more exposed to the cold this liquid is, the more likely that something like this will eventually happen.

In addition, as a driver, you must be aware that some fuel gauges can be tricked into showing more gas than your car actually carries because of the increased viscosity.

By the way, we would like you to take into consideration that any water (even if it is a vapor or condensation) can turn to ice in your car’s fuel system! This can lead to the fuel line breakage or at least blockage which will later result in preventing adequate gas from getting to your combustion chambers.

So how do you know that your fuel line is already frozen? Well, first of all, we need to note that a completely blocked line is practically impossible between the low amount of water in the system and the gas itself. The alcohol that the fuel contains absorbs the water in order to minimize such problems as much as possible.

So if your fuel line is partially frozen, you will understand that from the following signs:

In such a case, when your car’s fuel line is partially frozen, the only way to get your vehicle running is to get it somewhere warmer. Or, as an alternative option, you can persevere with the ignition process.

This is why, in order to avoid any fuss with your gas line repairs or other similar stuff, we recommend you make use of a few easy yet helpful tips for preventing any cold weather issues.

In general, you will hardly have any nasty problems with your fuel line even if you live in the area with really cold winters and frigid climate.

All thanks to the modern chemical industry which produces gas that already contains special additives that discourage gelling. By the way, such gas is usually sold in colder parts of the world.

But if you don’t have a possibility to get such a fuel, you can take a few steps instead to make winter life easier for both yourself and your vehicle:

With these tips, you will be able to avoid a lot of troubles with your engine and your fuel line that most drivers experience after the colds arrive.

How to Store Gasoline Correctly?

There is another point of concern for each driver that starts bothering him or her in winter, and it is the gasoline storage. What shall you do about those gas cans?

Since canisters that gas is usually kept in are only able to hold no more than a few gallons of fuel, they tend to have problems way faster than, for example, larger capacity tanks. And unless your garage or shed is heated, there will not be much shelter for them when the temperature drops low outside.

Obviously, nobody wants to store gas inside of their house or apartment, even though it is warm in there! The major reason is very clear to see: gas is highly flammable and it can ignite from even the tiniest sparkle catching the whole building on fire!

This is why we recommend you choose a fuel stabilizer and add it to the cans with gas that you have. Like this, you will prevent the gas from separating into useless and unusable components. It will also help to keep your fuel from getting stale, which is another huge storage difficulty and issue.

In addition, you should not forget about keeping a decent amount of gasoline in your tank to minimize any possible issues and make sure you can always get around in case a sudden fuel shortage takes place.

Well, friends, today you have learned plenty of new and, hopefully, useful information for yourself!

We told you how cold it must be to make your gas fuel freeze, and also, you are now aware that this substance will not actually solidify completely! Even when reaching its freezing point of -100 degrees Fahrenheit, it will partially remain in a proper state.

In addition, we shared a few handy life hacks with you so that you could prevent any unwanted and unexpected issues with your fuel and car engine during the winter. With those in mind, colds will hardly become a problem for you again.

Also, now you know that it does not matter where gas is, in your car’s tank or in a canister in your garage, it will anyway freeze at -100 F.

Thanks to this information, you will now be able to figure out how warm it shall be in the place where you usually keep your fuel so that it remains in a proper state in order to be used anytime you need it.

⭐ Can gasoline be stored in freezing temperatures?

⭐ Can a quarter gas tank freeze?

⭐ How to dispose of gas leftovers?

It’s best to bring it to the City landfill throw-and-go in a tightly sealed and clearly marked tank.

Olivia shares all she knows about the hotels, houses, and home cleaning with Beezzly readers. And she knows a lot! 15 years of work experience as a Manager in a former Four Season Service gave Olivia an exceptional base of professional knowledge and practical experience.

Useful Tips On How to Get Diesel Fuel Out Of Clothes

10 Hacks | How to Keep Your Car Warm Overnight?

At What Temperature Outside to Put Heating On?

How Long Is Spilled Gas Flammable?

How Much Propane Does a Gas Fireplace Use?

How Long Does Driveway Paint Last?
Don't have enough
time to read in a day?
Get the most rated articles on your email!